At the forthcoming ESLP 2018 event, Researcher Michela Caldano will give a talk on Spatial demonstratives and perceptual space: To reach or not to reach in the sagittal and lateral planes? There is much debate regarding the relationship between spatial demonstratives (‘this’ or ‘that’)  and perceptual space. While some have argued for a close mapping between the use of demonstratives and the peripersonal/extrapersonal space distinction (Coventry et al., 2008, 2014; Diessel, 2005, 2014), others have argued that distance from a speaker does not affect demonstrative choice (e.g. Kemmerer, 1999; Peeters et al., 2015).

Michela will highlight her recent experiments investigating the mapping between the use of demonstratives and perceptual space across sagittal and lateral planes using a variant of the ‘memory game’ method (Coventry et al., 2008; Gudde et al., 2018) where participants were instructed to use language to memorise object location to elicit the production of demonstratives (without being aware about the real purpose of the study).

ESR Patricia González Peña will give a talk at the AttLis 2018 conference, organised by NNTU Trondheim, 29th– 31st of August.  Patricia, who is hosted by the University of East Anglia, will present her findings on the development of demonstrative words at the talk Effect of distance and ownership on the use of demonstratives in development.

ESR Sara Ramos Cabo from the Language Acquisition and Language Processing Lab at NTNU, recently gave a talk about her project at a Seminar organised by co-supervisor, Professor Joana Acha Morcillo, at the University of the Basque Country (Faculty of Psychology). 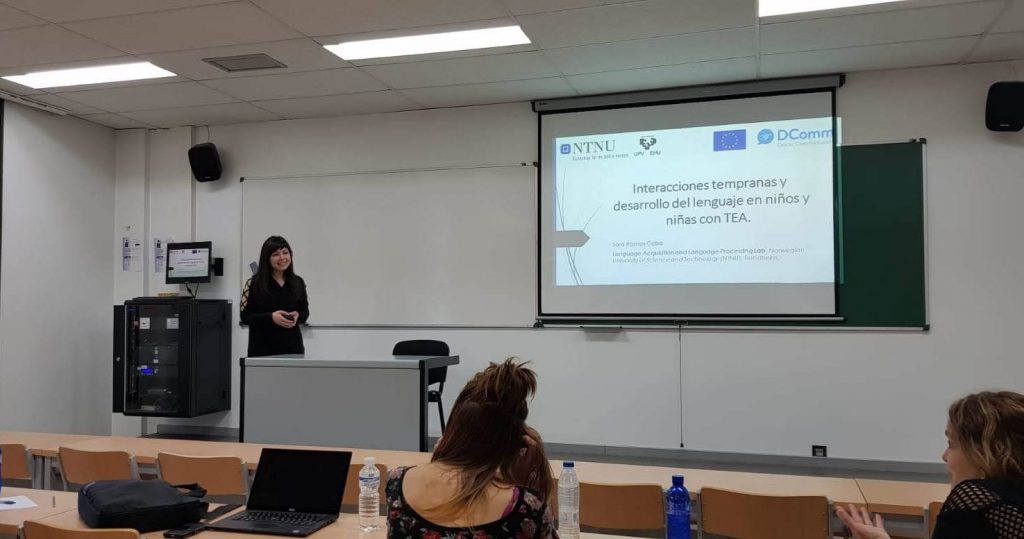 At a recent event for prospective PhD students and current post-docs, ESR Merlijn Breunesse shared her experience of being a Marie Sklodowska-Curie Fellow on the DCOMM Grant.  The event, joining organised by the Freidrich-Schiller-Universität Jena and KoWi (Kooperationsstelle EU der Wissenschaftsorganisationen), considered ‘Research in Europe’ and funding mechanisms.

ESR Merlijn Breunesse and her colleague, Barthe Bloom, have had a poster accepted for the 20th International Congress of Linguists 2018 to be held in Cape Town in July.   The Abstract for  “The role of (inter)subjectification in the development of the Norwegian preproprial article into the psychologically distal demonstrative” -can be viewed here

ESR Emanuela Todisco recently presented her research in Cadiz, Spain.  Hosted by the Universitat de les Illes Ballears, Spain, her research (with PI Professor Pedro Guijarro Fuentes)  was presented at the XXXVI AESLA International Conference. A sample of 100 simultaneous bilinguals is being recruited to conduct a pioneering experiment focusing on the adult production of demonstratives. For more information read the Abstract at AESLA2018

Researchers and PIs recently met at ETH Zürich to consider the synergies between basic research and application.  Presentations included one from Professor Bart Clarysse (who holds the Chair in Entrepreneurship at ETH Zürich) and also an introduction from KCAP DCOMM Partner  Ute Schneider.

For queries about the DCOMM project please contact the Project Administrator: