Emanuela Todisco is currently a PhD student in the DComm Marie Sklowdoska-Curie project at the University of the Balearic Islands in Palma de Mallorca. She studied Comparative Languages and Cultures at the University L’Orientale in Naples and Theoretical and Applied Linguistics at Pisa University in Italy. After her MA graduation in 2014, she worked as a contract researcher at the University of Pisa and as a collaborative researcher at the IRCCS Fondazione Stella Maris in Calambrone (Pisa – Italy). Both working experiences were centered on the analysis of the intersection between verbal and nonverbal counterparts of early communication in children with typical and delayed language acquisition. Her research interests include monolingual and bilingual speakers, as well as the neurocognitive involvement in language processing. 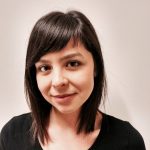 Sara Ramos Cabo holds a BA in Psychology, a specialisation Diploma in Neuropsychology, an MA in Cognitive Neuroscience of Language (BCBL) and has more than four years of experience working with different clinical populations (learning disorders, Down syndrome, Alzheimer’s and other dementias). Her research interests include the interface between language and cognition, neurodevelopmental disorders and language impairment. 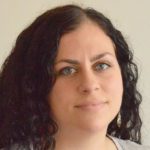 Patricia González-Peña obtained her Bachelor’s degree in Psychology in 2009 at the University of La Laguna, Spain. She holds a Master’s degree in Cognitive Neuroscience and Special Educational Needs (2016). Her Master thesis, supervised by Dr. Sergio Hernández, focused on the study of the executive functioning of children with autism spectrum disorder and was published in a Spanish Journal.  Since Patricia began her undergraduate years, she has gathered abundant experience working in education and the care of children and adults with various developmental and mental disorders, providing a unique insight to her further career. Currently, she works under the supervision of Dr. Martin Doherty and Dr. Andrew Bayliss at the University of East Anglia. Her research interests include language development, joint attention, theory of mind and autism spectrum disorder.

Michela started her PhD at the University of East Anglia (UEA) in September 2016. She graduated in Psychology at the University of Turin (Italy) in March 2016. During her master thesis Michela explored deficit of tactile detection and localisation in stroke patients. While attending the last year of her bachelor degree Michela started an internship in the department of psychology at the University of Turin and developed an interest in research. In addition, this training afforded her the opportunity to develop skills in Transcranial Magnetic Stimulation (TMS) and transcranial Direct-Current Stimulation (tDCS) used in research with healthy subjects and in the rehabilitation of stroke and dystonic patients. At the end of Michela’s masters degree she spent a period at the INSERM (institut national de la santé et de la recherché médicale) located in Lyon (France) running an experiment with healthy subject and prism adaptation. Her current project is studying deictic communication in stroke patients with and without spatial neglect. Pointing movements, deictic communication and spatial memory will be investigated in patients with a right-brain lesion. Michela will also study the effect of prism adaptation on demonstratives use and on spatial memory for object location. 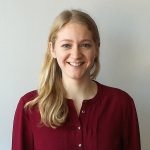 Merlijn Breunesse started her academic career at VU University in Amsterdam, studying for a Bachelor’s degree in Latin and Ancient Greek. She also holds a Master’s degree in Linguistics with a specialization in diachronic and comparative linguistics from KU Leuven University. She is now part of the DComm project at the Friedrich-Schiller-Universität in Jena. Her PhD dissertation focuses on the semantic, syntactic, and phonetic properties of demonstratives, and on their use in English and Latin discourse. Merlijn aims to combine her knowledge of general linguistics with her passion for Latin and Ancient Greek. Apart from spatial deixis, she is also interested in Historical Pragmatics and grammaticalization theory. 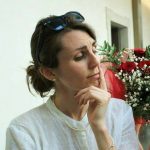 Roberta holds a MSc in Cognitive Science (track: Language and Multimodal Interaction) from CIMeC, University of Trento. During her Masters, she worked as an intern at the Max Planck Institute for Psycholinguistics in Nijmegen (supervisor: Dr. Judith Holler) and at the Dept. of Experimental Psychology at UCL (supervisor: Dr. Daniel Richardson). Roberta’s Master thesis focused on the role of multimodal cues (gaze, gestures, facial expressions) in turn-end anticipation in linguistic interactions. The Aarhus project aims to shed light on the neural correlates of spatial demonstratives. To get a grasp of what it is about, it is probably worth focusing on a very basic, perhaps trivial, fact: both the production and comprehension of spatial demonstratives cannot but heavily rely on cognitive resources for space perception and attention. Along the lines of this observation and of previous work on space and language, they aim to clarify the mapping between the use of spatial demonstratives on neural resources for non-linguistic spatial cognition, mostly relying on fMRI. 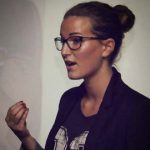 Anita Slonimska holds a BA degree in Italian Language & Culture in Latvian Academy of Culture and wrote her thesis on Italian symbolic gestures. She holds a MA degree (Bene Meritum) in Linguistics and a Research MA degree (Cum Laude) in Language and Communication from Radboud University in Nijmegen, the Netherlands. She wrote her MA thesis on gesture highlighting strategies to addressees of different ages and her ReMA thesis on phonetic and contextual cues affecting question prediction in speech. Anita’s PhD is part of a Marie Skłodowska-Curie actions network grant – Innovative Training project DCOMM). Research within this project will focus on deictic communication in sign languages. Anita is an external PhD student with the Radboud University and the Multimodal Language and Cognition lab while she is funded and working with Prof. Olga Capirci (National Research Council (CNR), Institute of Cognitive Sciences and Technologies (ISTC) – Rome, Italy). Her main academic interests are rooted in pragmatics in light of multimodal communication and universals in interaction. 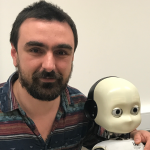 Baris Serhan is a PhD student and researcher at the Centre for Robotics and Neural Systems (CRNS), at Plymouth University (subsequently transferring to University of Manchester). His research focuses on developing a cognitive robotics architecture for the acquisition of demonstratives and their link to gestures. He received his MSc degree in Cognitive Science from Middle East Technical University (METU), Ankara. His master thesis was focused on the role of dopaminergic modulation on attentional shifting between different sensory modalities in fruit flies. This research was supported by the Scientific and Technological Research Council of Turkey (TUBITAK) and he worked as a project assistant in TOBB University of Economics and Technology, Ankara. During his master studies, he developed expertise in various fields such as Neural Modelling, Affective Neuroscience, Time Cognition and Cognitive Linguistics. Baris has a BSc degree in Computer Engineering from Galatasaray University, Istanbul, where he gravitated towards Robotics and Artificial Intelligence (AI), and as a part of his final year project, he developed a Brain Computer Interface (BCI) to control a humanoid robot using EEG signals. 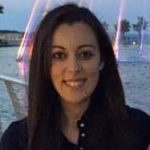 Gabriella graduated as an electrical engineer from the University of Malta, specialising in control and electronics. After completing an internship as a research engineer in biomedical electronics, she was awarded a scholarship to read for a Master’s degree in Computational Neuroscience and Cognitive Robotics at the University of Birmingham, where she worked mostly on model learning and control applied to robotic manipulators. In October 2016, she joined the Centre for Robotics and Neural Systems at Plymouth University (subsequently transferring to University of Manchester) as a Marie Curie Early Stage Researcher in Cognitive Robotics, under the supervision of Prof. Angelo Cangelosi. She is passionate about applying her interdisciplinary background to improve current robotic technology. 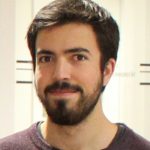 Samuel started his career as a computer scientist/engineer and later graduated as an Erasmus Mundus Master of Science in Geospatial Technologies. He also had the opportunity of being involved in another european project related to smart open cities. Additionally Samuel has been actively working in diverse activities related to computation, mobile phone development and human-computer interaction. 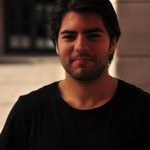 Mehmet Aydin Baytaş is hosted by Qualisys in Gothenburg, where he applies his skills in user-centered design and software development to create convenient motion capture solutions for linguistics research and other uses. He has degrees in mechanical engineering, economics, and interaction design from Koç University (Istanbul), and he is currently pursuing a PhD in human-computer interaction. At night, he turns into a musician and DJ. 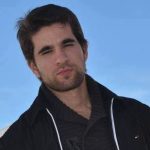 Raed Bsili holds a MSc Degree in Mechanical Engineering with a major in Mechatronics/Space Systems Engineering from SUPMECA Paris and with an Exchange year at the Delft University of Technologies (Master Track: Spaceflight). Raed has a Graduation Thesis based on the European funded FP7-SLOGAN project. He is currently an European MSCA (Marie Skłodowska-Curie Actions) Early-Stage Researcher Fellow, working for the DCOMM EU H2020 Funded Project. 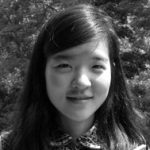 Yesol Park holds degrees of Bachelor and Master of Landscape Architecture from Kingston University, London and Wageningen University, Netherlands. She worked as an architect and urban designer at global architectural company ARUP. She is currently a Ph.D candidate and researcher at the cognitive science research group at ETH Zürich. Her Ph.D study is also part of the Marie Sklodowska-Curie Actions Innovative Training Network, DCOMM. She is passionate about using her interdisciplinary experience to make science helpful for architectural design.